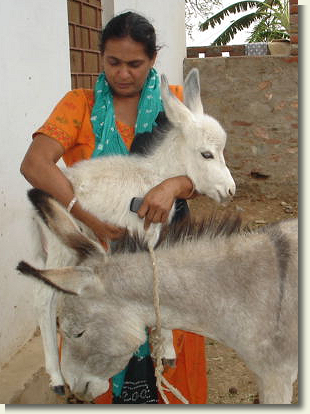 Mrs. Suman Bose was born in 1956 in Himachal Pradesh. Her father, worked for the Indian Government in New Delhi. Her fsmily shifted to Delhi when she was one year old. She completed her formal education there, graduating in 1978 in Arts from Kamla Nehru Women's College, Delhi. That same year she married Pradeep Bose a veterinary doctor who worked in Ludhiana District Punjab. Suman and Pradeep shared a common love of animals and poetry.

In 1993, the family, which now included two sons, moved to Udaipur City, Rajasthan where Pradeep had accepted a new position. A year later Suman started her first animal shelter in Udaipur. She felt compelled to act after witnessing the cruelty meted out to street animals, deserted pets, and an influx of domestic animals in the streets of Udaipur after a drought in 1994. The first shelter began with 17 animals (a donkey, fourteen cows and two dogs) in a rented house.

She formalized her efforts in 1996-97, registering a charitable institution called Pashupati Kalyan Parishad (PKP). After that she began raising funds for the animal shelter in Udiapur. It has steadily grown into a campus of three bighas in the outskirts of Udaipur town. It is now house for more than 250 animals at any given time.

Suman has been very fortunate to receive support from local policemen, generous businessmen, and many small local charities, as well as the District Administration. Arranging daily green fodder and dry rations for a growing number of animals with medical facilities has been a constant challenge. She has had to move with her ‘begging bowl’ from one town to another. Keeping some milch-cattle and selling dung as fertilizer to farmers also helps raise necessary revenue for PKP